You no longer need to be based in Silicon Valley to be the next best technology venture. CoinGecko, a cryptocurrency start-up poised to become the world’s most viewed crypto ranking website, is proudly homegrown and currently based in Malaysia.

The website was founded in 2014 by Bobby Ong and T M Lee. It tracks the price, volume and market capitalisation of a cryptocurrency or token, as well as major events and other significant details of the crypto world. It started off with tracking only 20 tokens and now deals with more than 6,000.

Potential investors, traders, researchers and fans of cryptocurrencies alike depend on websites such as this to keep abreast of the crypto market. The level of work that goes into ranking the currencies and tokens is extremely extensive, including the number of developers working on the coin and its community.

Ong, a University College London economics graduate, tells Digital Edge that there were simply not enough resources available at the time to do further research on the coins, especially altcoins, in the market.

Alt-coins normally refer to the group of other crypto tokens that are not bitcoin, such as Dogecoin and Litecoin

This ultimately led him to work with Lee, a Purdue University computer science graduate, to come up with a solution.

After studying overseas, where he also learnt programming, Ong became somewhat of a techie and, like most techies, he patronised the various tech forums around at the time. There was much talk of bitcoin as a new form of money on these forums.

“I was curious as to why my lecturers never mentioned it,but maybe 2012 was too early.

I had already learnt everything about traditional finance and monetary systems, so this new form of money led me to read the whitepaper that had been written on it,” Ong recalls.

Lee, on the other hand, wanted to be involved with something related to Software-as-a-Service that could help a lot of people globally. But, he was not taken seriously by the payment gateways he reached out to. “I didn’t have enough money in my bank account for them to even entertain me,” he recalls.

After finding out about bitcoin online, he found his interest piqued by the idea of money not controlled by a central authority.

Success does not come easy

There was not a lot of money to be made in the early days. Their biggest challenge was that the industry was too small and niche, says Ong.

“Nobody understood bitcoin or even saw the potential for blockchain technology back then. This made it extremely hard to explain to others what we were doing and where CoinGecko could go. This was also one of the reasons we chose not to raise any money. Most VCs (venture capitalists) did not understand our industry,” he adds. 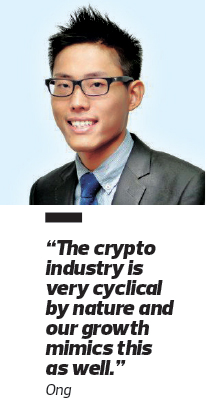 “Our growth wasn’t quick at all; it is six years of hard work,” Lee recounts. Before expanding their team, the co-founders were bootstrapping and did not draw salaries for two to three years. They kept their day jobs to keep the lights on, and had sleepless nights trying to keep the website running by themselves.

Previously, Ong was a digital marketer at a property developer whereas Lee was a freelance software engineer.

“I do the tech part and Bobby sells. We did almost everything ourselves, kept our burn rate low and deferred hiring to as late as possible. We were still validating whether there was a market fit for CoinGecko, so it made experimenting easier when it was just us two. It also forced us to think hard about the ways to get the job done with very limited resources,” says Lee.

Even though bootstrapping was challenging for them, the pair noticed that it fit the kind of company they wanted to run. “It’s about building a sustainable business and product that we enjoy while aiming for long-term hypergrowth. Because of the cyclical nature of the market, having a long-term mindset was key to staying in business and continuing to be part of shaping the crypto industry,” Lee says.

Making it on your own

Neither came from wealthy families and there was no private equity financing in the early days.

“There were no parents to bankroll us. We kept it low-cost and kept reinvesting; this helped us stay in the game. When you have too much money, you essentially lose the hustle aspect. For most start-ups, it’s just about raising venture capital and burning through money,” Lee says.

Starting with only about RM1,000 to pay for the domain and cloud servers, Ong says, start-up costs for a purely digital business with no employee is really low. “Everything else was through our own time and effort. We didn’t raise external funds from friends or family, or take out a loan,” Ong says.

By 2017, the co-founders were fully focused on the website. Their first hire happened only in January 2018 and it was a friend they had known for five years. “We really needed a software engineer to help clear some of our technical debt, as we were facing massive scalability issues during the 2017 [cryptocurrency] bull run. Thankfully, he was available and we got him on board,” says Ong.

They then rented an office in Taman Tun Dr Ismail, having previously been working remotely. Now, the team has close to 30 people and they plan to double in size this year. All the full-timers and interns are from Malaysia, adds Ong.

What started out as a side-hustle became their bread and butter, with revenues now going up to six figures in US dollar terms. CoinGecko is currently the world’s largest independent crypto data aggregator and a global top 10 crypto website.

“In January 2021, we received over 120 million pageviews on CoinGecko. Contrast this to January 2020, when we received only 12 million. This represents a tenfold year-on-year growth. That being said, the crypto industry is very cyclical by nature and our growth mimics this as well,” adds Ong.

Talk of being acquired

“Coinmarketcap used to be seven times larger than us. Now, it is only 20% larger and we’re on track to overtake it this year,” tells Ong.

Binance, a cryptocurrency exchange, acquired Coinmarketcap (a data ranking website) for about US$400 million in 2020, as reported by The Block, a research and news brand in the digital asset space. It noted that Coinmarketcap’s leadership team left just four months after the acquisition.

Ong says Coingecko has received many offers from other companies that want to either invest in or acquire it, but it has not looked at any of these seriously. “The market is still in the very early stages of development, and we have a lot more to offer,” says Ong, adding that selling at this point would mean not fully executing their ideas in terms of how the company is to develop.

With Tesla Inc recently purchasing US$1.5 billion (RM6.1 billion) in bitcoin and having plans to accept it as payment and talk of other companies such as Apple Inc to follow suit, cryptocurency looks set to say.

“As the crypto industry gains mainstream adoption, the space is only going to get more complex and there will be new problems to be solved. These are the challenges that we are thinking about every day, how we can scale and organise all the crypto market information in a way that anyone can understand and track,” says Lee.